Since the first vaccination administered in Latin America on December 24, 2020 in Mexico, vaccination campaigns continue, let’s take stock country by country on their progress. It is important to note that prioritization criteria  have been defined in order to protect first health workers, then  people  over 60 years of age as well as adults with significant risk factors.

Currently, Latin America is the geographic area with the highest vaccination rate in the world. Third dose campaigns have begun in most countries.

Percentages of populations by country that received at least one dose of COVID-19 vaccine (Source : Our World in Data – 26/08/2022) 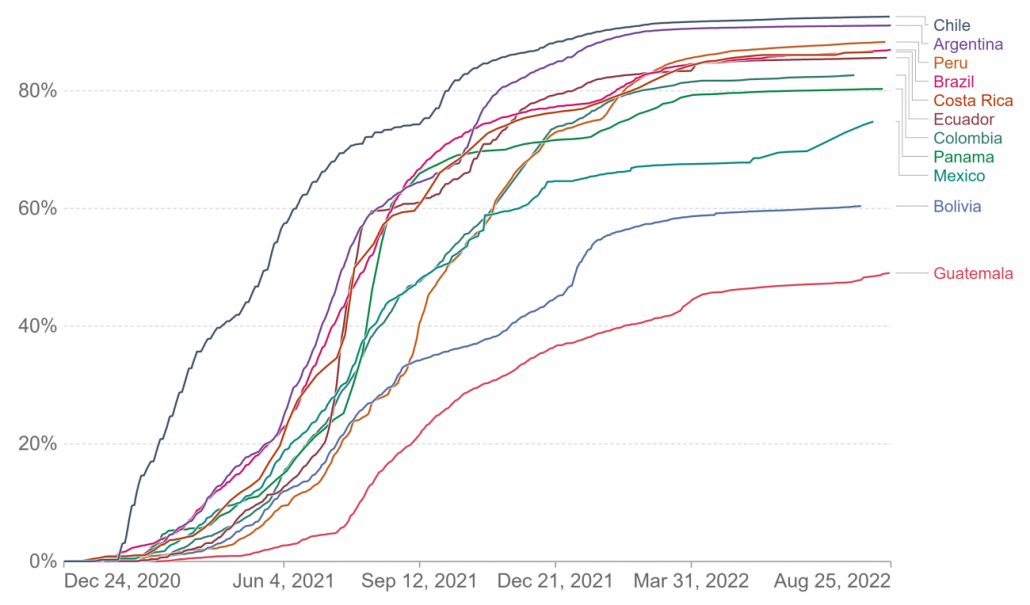 Argentina  has administered more than 109 million doses to date, or more than 90,9% of the population of which more than 37.7 million are fully immunized throughout the country. From the week of June 8, 2021, it will be the first country on the continent to produce the Russian vaccine Sputnik at a rate of 500,000 doses per week in order to accelerate this vaccination process.

In Bolivia, 7.3 million people were able to benefit from the vaccination campaign, or more than 62,5% of the total population.

Brazil,  which has been particularly affected by the pandemic, has been able to provide nearly 87,7% of its inhabitants with a first dose of vaccine and 184.6 million are now fully vaccinated.

In Chile, it has 94,4% of immunized children, of which more than 92.3% have received two doses. It is the most advanced Latin American country to date in its vaccination campaign.

Colombia  for its part has begun the last phase of its plan which has 5. The administration of a third dose has started since September 2021. To  date, 87.1 million doses have been administered  to a total of more than 42.5 million people or 83.4% of the target population.

In Ecuador, 86,4% of the population is immunized, for a total of 15.2 million people. The province of Galapagos for its part is fully vaccinated in order to allow the revival of tourism as quickly and safely as possible.

In Guatemala, 51,2% of the population has had access to the COVID-19 vaccine, or just over 8.6 million people. The United States, through Vice President Kamala Harris, has announced the sending of half a million doses in order to speed up the vaccination process.

Mexico has  79,9 million supplements vaccinated, or 62% of its target population and 73.5% of first-time vaccinated. In the coming weeks the process will be intensified according to the government.

Nearly 3,49 million habitants of Panama  have received a first dose and 3,1 million people are fully vaccinated, or 72.7% of the population.

In Peru 85.1% of the population is vaccinated and more than 28 million others 29.7 milion have already received a first injection.

Where and what vaccines are used in Latin America 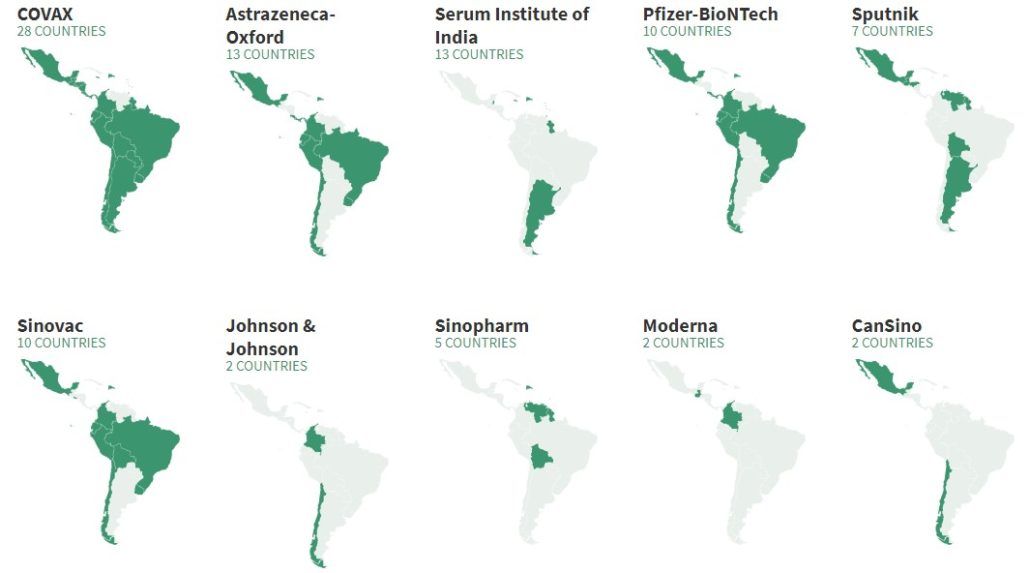